In this Nature’s Way Turmeric Review, I will do my best to provide as exhaustive information about the supplement as possible.

We’ll first look at the promises that the manufacturer makes. After that, we’ll put it all to test by exploring the very core ingredient of the supplement and its potential benefits. And then we’ll go even deeper than that by exploring additives, as well as looking at some additional considerations that one must not forget when shopping for Turmeric supplement.

All to make as accurate of an assessment about the Nature’s Way Turmeric as possible.

Nature’s Way Turmeric is a singular supplement of Indian herb (that is of incredible antioxidant properties known as Turmeric) made in a 95% Standardized fashion (more into what’s that we’ll get to in a bit). 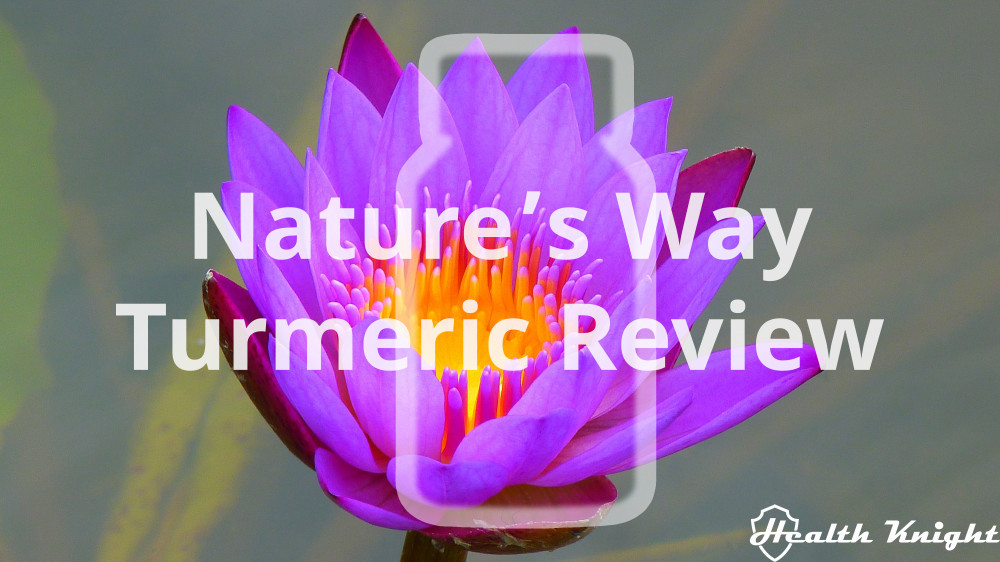 There are 3 various tablet/capsule form Turmeric supplements available by Nature’s Way. All of them have their own separate description page, however, in all of them, they barely provide any more information than the supplement facts alone [R, R, R, R].

All of the three supplements are claimed to be Vegetarian and to not contain artificial coloring, artificial flavoring, dairy products, gluten, preservatives, salt, soy, sugar, wheat, or yeast.

All of these three supplements also are TRU-ID™ Certified, which means that the authenticity of our herbal products has been ensured by an independent testing program. Thus, you can be absolutely sure that the herbs listed on the label 100% match the ones in the supplement.

But other than that, it’s all supplement facts.

Turmeric The Right Way – With Loads Of Curcuminoids

Although there are 3 separate description pages, in truth, there are only 2 different supplements with one of them having two different dosing options [R, R, R, R].

Those both tablet versions (500 mg ones) are completely identical supplements with the only difference being the total tablet count. For simplicity reasons, I’ll refer to both of these as the 500 mg versions.

Either way both of the supplement-versions offer all of its Turmeric in a 95% Standardized Turmeric Extract fashion.

While for some this might be an unfamiliar term (“Standardized”), all that it really means is that it is guaranteed for the supplement to contain 95% Curcuminoids of the complete mass of the Turmeric Extract [R, R, R, R, R, R].

Both of which are insanely good and will for sure account for significant health benefits if used daily on a long enough timeline.

So, it’s insanely good for anyone who wants to truly improve health as this is something that will genuinely empower your body and mind.

Additives – It Depends On Which Version You Roll With

Many people falsely neglect additives as something unimportant. But as with anything we consume and choose to put into our bodies, they do matter – so, nothing can be further from the truth.

All additives generally can be divided into two big groups – the harmless ones and the harmful ones (although in my own work I do categorize also beneficial ones).

Depending on the version of Nature’s Way Turmeric not all additives will be harmless.

In other words, there is quite a huge difference between the 500 mg versions and the 750 mg version.

I mean it’s probably obvious which is the one that is a mix of harmful and harmless additives and which one is solely all about harmless additives based on the total additive number alone. While this generally may or may not be true, in this case, the 750 mg version with fewer is the much better option – the absolutely harmless option.

The main problem in regards to the 500 mg versions is the organic maltodextrin.

Furthermore, do you recall that Nature’s Way claim that there is no sugar in the supplement?

Well, whoops… Maltodextrin is, in essence, a sugar – a carbohydrate with zero nutritional value, which raises blood sugar levels much faster than your typical table sugar. Some even go as far as referring to maltodextrin as one of the worst hidden sugars. Which I do completely agree with [R, R, R, R, R, R].

While being a sugar, Maltodextrin can be the potential root cause of everything from heart disease to cancer, including obesity, eating disorders, diabetes, depression, learning difficulties, hyperactivity, as well as it can just flat out make you stupid [R, R, R, R, R, R, R].

But the potentially devastating effects of it does not stop there.

Maltodextrin can also have other for maltodextrin specifically inherent hazardous effects. Such are a sudden headache, difficulty breathing, itching, rash, bloating, diarrhea, weakened the immune system, as well as a list of other, particularly unpleasant effects [R, R, R, R, R, R].

Additionally, Maltodextrin is considered to be a wonderful substance that can be used to hide many potentially more dangerous additives than it already is [R, R, R].

I mean, it’s a marvelous substance to consume if you don’t care about your health, well-being, and longevity at all.

Thus, at the end of the day, I would consider the 500 mg versions of the Nature’s Way Turmeric to be completely out of the picture and you should never go for them. Ever.

As for the 750 mg version, neither of its additives are considered harmful, in fact, some even consider that if anything Hypromellose should be regarded as beneficial [R].

When it comes to Turmeric supplementation there are a few additional things worth noting.

Turmeric is a substance of patience [R].

What I mean is that Turmeric supplementation takes time to really kick in. So, we’re looking at a time frame of up to 8 weeks of daily consumption for the full benefits to become apparent [R].

The other thing worth noting is that Turmeric is actually very hard to absorb substance for our bodies. Thus, if you choose to only take Turmeric it will not be as beneficial as it could be [R, R, R, R].

So, preferably it should always be taken together with Black Pepper or Piperine. This way the absorption gets increased by up to 2000%. Which if you ask me is quite a difference [R, R, R, R].

I mean, it’s not impossible to get some benefit out of Turmeric if you consume it without Black Pepper or Piperine. However, it will be as noted significantly more ineffective. In truth, you will be wasting your money in a way.

Sadly, this applies to all three versions of the Nature’s Way Turmeric, including the 750 mg version. They do not provide any of the two absorption enhancers mentioned earlier.

While all of the three variations of Nature’s Way Turmeric provide good amounts of Curcuminoids within them, not all of them should be regarded as good supplements.

Both 500 mg (tablet) versions of the supplement disappoint in terms of additives. Furthermore, it’s claimed that they do not contain sugar, however, they do.

As for the 750 mg (capsule) version of the supplement, it is a good supplement as it does not stumble with flaws 500 mg versions do.

At the same time, I would not consider it a great supplement as it lacks both Black Pepper and Piperine – substances of which having at least one is absolutely crucial as it enables effective Curcuminoids (Turmeric) absorption.

Thus, if a Great Turmeric supplement is what you are after, definitely check you the NatureWise Curcumin (for vegetarians and people generally) or the Nutrigold Turmeric Curcumin Gold (for vegans).

Other than that, I hope this Nature’s Way Turmeric review helped you find the information you were looking for. But if not, definitely let me know in the comments on how I could further improve it.