In this New Chapter Turmeric Force review, we’ll explore the supplement in its entirety.

To make that happen, we will first look at all of the claims, then we’ll take a nose dive into all of its ingredients, including the ones by far most reviews out there are completely negligent about. And in the mix of things, we’ll also provide some key insights what regards the benefits, as well as the success rate.

According to the manufacturer, New Chapter Turmeric Force is their top-selling herbal supplement that’s an exemplar of a whole-food Turmeric that’s sourced from its natural habitat in India and other places around the world [R]. 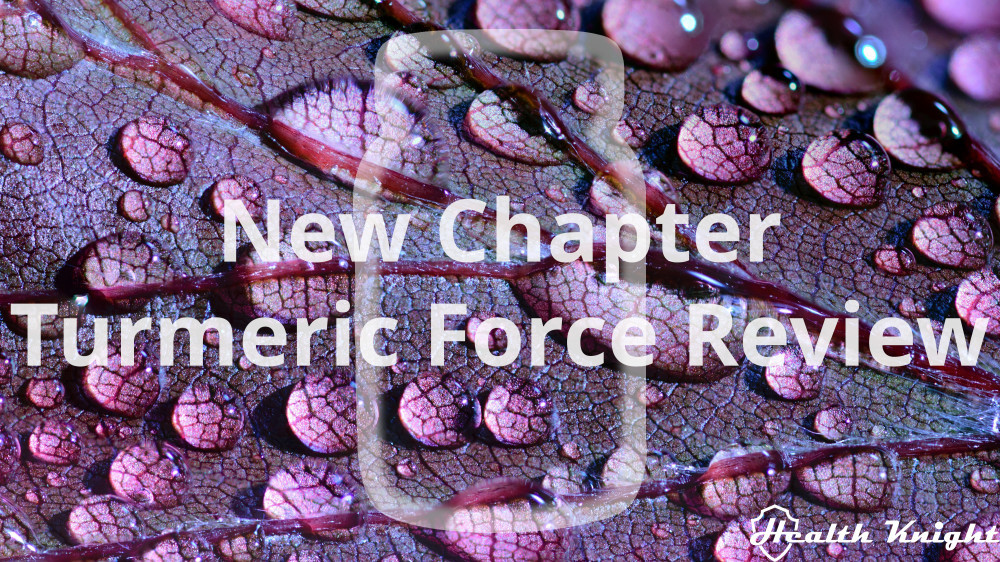 Overall, the description page for this supplement is a pretty straight forward one. There’s not too much information, it takes about 2 minutes to go through all of it, which includes a video that’s 50 seconds long.

Speaking of the video, it suggests that New Chapter produces Turmeric supplements in a way more beneficial way than it’s done generally. Thus, they propose that no Black Peper or Piperine is necessary to improve absorption.

Here’s exactly how they put it:

In that regard, we will examine whether or not it’s true, is it really the better option?

Other than that, the description page provides a few insights on the potential benefits. As the core benefits, they list a healthy inflammation response and supports heart and brain health. However, we’ll see that Turmeric in its benefits reaches far beyond that.

Then there are the supplement facts (which we’ll get into in the next section), info on the suggested use, some additional info such as the capsule being 100% vegetarian.

Then there are also some pledges as to the high-quality ingredients that they use. And additionally, they also have a section for reviews, which at this time has only two, both are 5-star ratings (one posted 3 years ago and the other 2 years ago).

All in all, this for sure sounds pretty solid. But do the ingredients actually live up to it?

If you’ve happened to have done any Turmeric supplement research at all in the past, you’ll be very familiar with the fact that these are not your typical Turmeric supplement ingredients. They usually have something like the 95% standardized Turmeric extract or just straight up Turmeric herb extract.

To not make it too confusing, Aqueous (extract) and Supercritical (extract) both refer to the ways how the beneficial stuff of the Turmeric are being extracted (For both of the extracts, we see the name of ‘Rhizome’ in the brackets. Rhizome refers to the type of a continuously growing horizontal underground stem which puts out lateral shoots and adventitious roots at intervals. It essentially refers to the way the plant is growing) [R, R, R, R, R, R, R, R, R].

Overall, while they do seem to be somewhat advantages (definitely the more sophisticated ways) when compared with a standalone 95% standardized Turmeric, I’m not convinced that it can stand it’s own when that Turmeric is coupled with Piperine.

I feel that at the end of the day it’s essentially a tradeoff of good amounts of Curcuminoids (the active ingredient in Turmeric that’s most beneficial) for some amounts of Turmerones (which do improve the natural Curcuminoid absorption).

Probably the only question now persisting is whether or not such a tradeoff is actually worth picking?

Curcuminoids Are The Focus Of All Benefits

When going with huge numbers of Curcuminoids, like a 95% standardized 1000 mg of Turmeric Extract plus some Black Pepper (Piperine) to 20 times improve absorption, you can be pretty sure that the benefits will be there [R, R, R, R].

This is what most studies use (95% standardized extracts) and that is exactly what has been proven to be the cause of such benefits as the improved ability of detoxification and brain function, lowered risk of heart disease and lowered cholesterol levels, protection against metal toxicity, slowed down aging, healing of pain and Arthritis among other benefits [R, R, R, R, R, R, R, R].

Whereas when it comes to Aqueous (extract) and Supercritical (extract) these are not as extensively studied. Plus, as far as I can tell, some suggest that there might be a slightly different profile of benefits altogether [R, R, R].

However, as far as I can tell, you might be missing out on some of the typical benefits of Curcuminoids.

Which overall I strongly believe is not worth it.

You could experiment with this or add this to your baseline Turmeric supplement, something like the Youtheory Turmeric or the Nutrigold Turmeric Curcumin Gold.

But I reckon you will be missing out if you’ll insist on the New Chapter Turmeric Force as a standalone supplement.

To truly assess whether or not this one is worth going for, we will look at the success rate in one of the later sections. But right now let’s jump into a section that by far most other reviews are completely negligent about.

The Blend Of Additives Are One Of The Safest

Additives supposedly are a somewhat controversial subject. Some believe all of those will harm you, thus, you should always seek out supplements and foods that do not have any. Others believe the exact opposite, namely, that they can never harm you.

There’s also a third group of additives – ones that can actually benefit you.

Thus, whenever you find yourself choosing a new supplement to try out, ideally you should check the additives that it has.

Purely because often times exactly these ingredients are the ones that determine whether or not the supplement is a horrible one, a bad one, a good one, or a great one.

Remember those three groups we just talked about – harmful ones, harmless ones, and beneficial ones?

In all honesty, it rarely gets better than this.

Taking a comprehensive look at all customer reviews that I could possibly find on the internet regarding the New Chapter Turmeric Force, made one thing absolutely clear.

Despite the unconventional forms of Turmeric extracts, it does work very well for people.

To be more exact, of all the reviews I could possibly find about 90% of them were positive.

Thus, I believe it’s fair to say that people generally do enjoy the New Chapter Turmeric Force and it has helped them to improve their health and overall well-being.

Moreover, it must be taken into account that generally people are more eager to leave negative reviews than positive ones.

Therefore, there is not a doubt in my mind that the actual success rate of this supplement is likely to be even higher.

Which is pretty incredible.

While the New Chapter Turmeric Force uses unconventional types of Turmeric extracts as its core components, it still seems to be a solid beneficial supplement.

Which is approved by the success rate of above 90%.

On top of that, it also employs more than just harmless additives. In truth, they are beneficial. Which essentially means that there are no risks in using this supplement.

There is only a huge potential for benefits.

That said though, there will be people who prefer the more studied variations of Turmeric ingredients, thus, a more conventional approach will be best.

I myself also am of the opinion that that would be the more beneficial approach, despite the fact that the success rate of this New Chapter Turmeric Force is a pretty high one.

Therefore, for now, there is only one supplement that I would recommend learning more about and considering – the vegan-certified one of Nutrigold (review). Also, the Gaia Turmeric Supreme is a decent option. But if you’re after the very best, I’ve done the research on that as well. Here’s my full review.

Above all, I hope this New Chapter Turmeric Force review helped you find the information you were looking for.