The Manufacturer of One A Day Men’s Health Formula claims it to be a complete multivitamin that is better than the Centrum equivalent of it. It is claimed to provide such benefits as improving heart health, blood pressure, immunity and physical energy [R].

In this One A Day Men’s Health Formula review we are going to challenge all of these assertions. But not only that.

We’ll also take a good in-depth look at its ingredients.

Vitamins Are Diverse But Scarce What Regards The Amounts

One A Day Men’s Health Formula contains such vitamins as Vitamin A, B1, B2, B3, B5, B6, B7, B9, B12, C, D3, E, and K1. In other words, it contains at least a trace of most of the basic vitamins that the human body needs daily (all except Choline). This makes it a good all-around type of a supplement at least from the perspective of vitamin diversity. 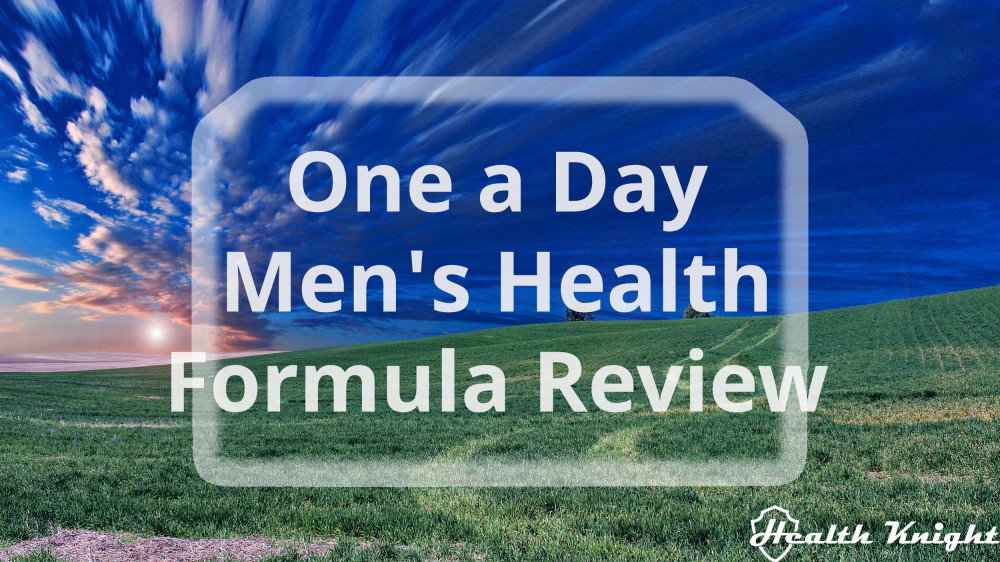 However, only a few of the vitamins in the supplement are in good forms for intake, only a few are in the amounts necessary (see Prime Daily Values).

Vitamin A overall is not in the best shape. It does have enough preformed Retinol. But other than that, One A Day Men’s Health Formula does only have beta-carotene in addition to that Retinol. Meaning, it has a single form of carotenoids, which is less than optimal. Other carotenoid forms like alpha-carotene, beta-cryptoxanthin, and few others are necessary to get the most out of Vitamin A [R, R, R, R, R, R].

As for Vitamin B6, B9 and B12 – all of these are present in the supplement NOT in their bioavailable or, for that matter, most effective forms. This basically means that for some people it might turn out to be hard to get any benefit that is ensured by these vitamins [R, R, R, R].

At the same time, Vitamin B7 is in the best form possible [R, R]. Whereas Vitamin C is in the form that is most common for supplements and that is not the best, but still quite optimal and okay for consumption [R, R, R, R].

Cholecalciferol is the best form of Vitamin D3 as it is the same form, which is made from the sunlight by our skin [R, R, R].

Vitamin E (in the form that it’s in) is a terrible choice. First of all this form is a synthetic one that is far less effective than its natural counterpart [R, R] And second, there are 7 more Vitamin E forms that One A Day Men’s Health Formula does not have. Although some of these forms seem to be more needed than others, all of these forms are really important to have [R, R, R].

Lastly, Vitamin K1 in its form is the most effective form there is [R, R, R].

Overall while most of the vitamins seemingly contain more than or at least 100% of the daily value, they make up only a little, tiny little part of the particular vitamins that are actually needed daily. This is because daily value does not represent the amounts that are recommended for daily consumption to achieve optimal health. In fact, they represent the minimum daily amount that must be acquired or else there is a very high chance for a person to become ill with a deficiency disease (for more information see Prime Daily Values).

Nonetheless, avoiding deficiency disease does not mean that you are healthy or that you have optimal health. It’s rather quite the opposite.

Minerals Overall Are Not Much Better Off Than Vitamins

One A Day Men’s Health Formula contains such minerals as Calcium, Magnesium, Zinc, Selenium, Copper, Manganese, Chromium. The amounts of these are semi-optimal for most of them.

Every single form for all of these minerals, except for Copper, are some of the weakest, most ineffective forms for consumption and benefit [R, R, R, R, R, R].

As for Copper, it has been proven to be completely unavailable to the body. In other words, it’s useless. The body can’t acquire any amount of Copper from the substance known as Cupric Oxide [R, R, R].

Furthermore, One A Day Men’s Health Formula also does not contain any of the following essential minerals that are important for your health: Boron, Iodine, Vanadium, Molybdenum, and Potassium.

It’s Called Men’s Because Of The Lycopene. But Why?

As of other beneficial substances, One A Day Men’s Health Formula contains Lycopene. This is also the only reason I can think of why this supplement is considered a supplement for men. What I mean is, there is literally no other explanation, why it should be considered category “Men”, because every other nutrient in this multivitamin supplement is needed as much for men as for women.

Researchers have proved that Lycopene has some amazing benefits, for example, it protects from DNA damage caused by oxidative stress, it positively influences prostate and skin health [R].

But is it really that it can benefit only men? No!

In fact, the study on DNA protection was done on women [R]. Studies suggesting improvement of skin health had also women as their subjects [R, R]. There are also other studies, which indicate positive health benefits for women using lycopene [R, R, R].

Taking this into account, in my opinion, the supplement name “Men’s Health Formula” is a pretty misleading one. What do you think? Let me know in the comment section below.

When It Comes To Additives It’s Not That Bad.

Croscarmellose Sodium (also known as E468) is an additive that is claimed to have shown to help to absorb the nutrients better (but some claim exactly the opposite). It can be manufactured from wood, cotton, corn or wheat, wherein the case of either corn or wheat, it can be especially harmful to people suffering from Celiac’s disease (allergic reactions might come as diarrhea, bloating, and severe stomach pain) [R, R, R]. Taking into account that gluten is one of the two substances causing most hidden-allergic reactions, one should preferably avoid Croscarmellose Sodium developed out of corn or wheat [R].

As indicated in the FAQs of One a Day, they claim not to add gluten to their products, but they do not guarantee all materials being 100% gluten-free [R]. So, Croscarmellose Sodium in this case probably contains gluten (at least we should assess that, because it’s not clearly stated to be free of gluten). In case there was no possibility of it containing gluten, it would most probably be perfectly safe to intake [R].

The only other thing is that Croscarmellose Sodium at times may cause intestinal blockage [R].

Crospovidone is the insoluble form of polyvinylpyrrolidone (also known as E1202). It’s primarily used for better-tabled disintegration (but can also be used as a binder) [R, R]. Supposedly, long-term studies have shown that Crospovidone (being insoluble) is completely excreted from the body. Therefore, it does not pose any threat to health [R].

Stearic Acid is considered as a low-hazard ingredient [R] Supposedly, researchers have found that stearic acid kills off T-cells, which are responsible for killing any cancer cells, otherwise with viruses infected cells and damaged cells in our body. It also completely blocks IL-2 production (which plays a vital role in our immune system). Stearic acid also suppresses our immune system’s natural response to “non-self” [R, R] (and by that is used to aid new organ acceptance after transplantation).

However, this is highly one-dimensional.

In fact, stearic acid is harmless to the human body. First of all, that study on T-cells was done on mice. Yet mouse T-cells don’t have an enzyme, which human T-cells does have. This enzyme basically prevents any excess build-up of stearic acid by converting it. So, this T-cell annihilation does not apply to humans in any way (therefore, the same goes for that IL-2 production) [R, R, R, R].

Regarding Triacetin (also known as Glyceryl Triacetate or E1518) two studies have shown no toxicity when giving high doses up to 6 months [R, R, R]. I believe this can be explained simply by the fact that Triacetin in our body is broken down into two components, both of which are also naturally present in our bodies [R].

There Are At Least 3 Dozens Better Multivitamins For Men

Although, by no means, it is the worst of the worst, there are many much, much better options than this one.

A lot of essential vitamins, as well as most of the minerals, are found in forms that are less than optimal for intake. A lot of minerals that are also needed for our bodies and minds, are not even present in One A Day Men’s Health Formula!

This supplement does have Lycopene, which provides some really awesome benefits, but this is not something essential to have in a multivitamin supplement and can also be gained from other supplements.

And as for vitamin amounts, other than the preformed form of Vitamin A and Vitamin D, there is a complete lack of the needed amounts of daily nutrients for optimal health.

Better options can be found here.

If you liked the article, please leave us a comment below – even one sentence helps! And consider including your Twitter handle so I can thank you personally!

A note, a question or your personal view on the supplement – all are truly welcome. And sharing will always be sincerely appreciated.

Have An Awesome Day!
Cheers!