In this Solgar Vitamin B12 review, we’ll shine a bright light on all nine products currently on the market more or less going by this name. And we’ll discuss it all.

We’ll dissect marketing and deflate the often overstated. We’ll speak of the core ingredients, as well as additives for each one. We’ll have a look at customer reviews and where do those opinions take us. And, of course, a bit on the pricing as well.

So, Solgar Vitamin B12 is basically a whole supplement brand. As mentioned, there are nine different supplements. And each of them gets its own product page. Thus, a ton of promotional materials altogether but actually quite brief if we’re looking at just each individual page separately. I really like the rather briefness [R, R, R, R, R, R, R, R, R]. 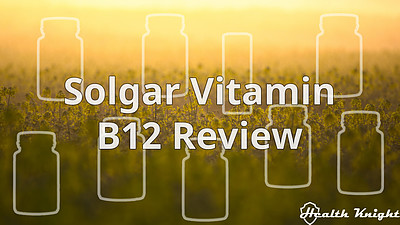 Personally, I prefer that every time over the extensiveness like that with Global Healing B12 (review) or even the PuraTHRIVE B12 (review) in certain ways. But on a deeper look, the pages of Solgar B12 supplements are even shorter than Trivita B12 (review) or Garden of Life B12 (review) ones. Because about 85% of the text repeats.

When it comes to the supplements of this review, it’s basically copy-paste for most of them. Some are the exception. Still, all of the pages and the descriptions, as well as pretty much everything is extremely similar.

As for marketing tactics to help sell the stuff, there pretty much isn’t anything with the Solgar Vitamin B12 lineup. Yes, there is a customer review section (which is absolutely empty 100% of the time), There are no “buy more or subscribe and get a discount” type of deals, no money-back guarantee, no testimonials. Kind of like Nature’s Bounty B12 options (review) and Jarrow Formulas Methyl B12 (review).

One thing that, however, is absolutely going their way is the fact that the Solgar brand has been around for more than 70 years. Which is not something many supplement manufacturers can say. Plus, almost all of them are Non-GMO, Gluten-Free, Dairy-Free, and vegan.

But are they genuinely worth the buck? Let’s look at the ingredients.

When it comes to ingredients, I typically like to start off with all the good, beneficial stuff, and then turn to the other stuff, the additives stuff. But with the nine Solgar Vitamin B12 supplements, I don’t think that will make much sense.

Mostly that’s because I feel it will become incredibly confusing that way. Hence, we’ll simply do it one supplement at a time. And so, then you can just jump right into the one you’re most interested in. Other than that, we’ll drop in the success rate percentages and cost estimates as well. But more in-depth on those later.

Solgar doesn’t really go fancy with its supplement names. Solgar Vitamin B12 100 Mcg Tablets is exactly what it sounds like. Namely, 100 micrograms of B12 per tablet, 100 of those tablets per container [R].

The trouble is though, that’s 100 micrograms of vitamin B12 as Cyanocobalamin. Which is just the worst form for this respective vitamin. I mean, sure, it can help heal a deficiency. But it’s the least effective one four we typically find in supplements.

It’s the cheap, revenue-oriented, synthetic option of the vitamin.

So, the beneficial stuff is not the most optimal. But additives are great (Microcrystalline Cellulose, Dicalcium Phosphate, Vegetable Cellulose, Vegetable Stearic Acid, Silica, Vegetable Magnesium Stearate).

As the name suggests, the Solgar Vitamin B12 500 Mcg is about tablets that contain 500 micrograms of vitamin B12 each. Here we also get 100 tablets per container. But there’s more that comes with it [R].

This supplement also offers 130 milligrams of Calcium. Which comes from a somewhat decent, somewhat effective source known as Dicalcium Phosphate. Which is something that, sadly, can’t be said about the B12 sourcing.

Because it’s Cyanocobalamin, again. That cheap, synthetic, least effective of all options option.

But speaking of not ideal, so are the additives that this one uses (Dicalcium Phosphate, Mannitol, Microcrystalline Cellulose, Vegetable Stearic Acid, Vegetable Cellulose, Silica). I mean, I’m fine with most. Not a fan of Mannitol.

All in all, these 500 micrograms of Solgar B12 do not appeal.

Switching away from tablets now. Capsules are typically easier to swallow than their tablet counterparts. Which is why many people prefer the former. But is it really the better alternative with the Solgar Vitamin B12 500 Mcg Vegetable Capsules here [R]?

Not really, the way I see it. It still uses that Cyanocobalamin. It’s still that profit-oriented version of supplementation. Which I am not a fan of. Plus, it doesn’t add any Calcium to the table as the tablet equivalent did.

But there is another way in which these capsules are not better than tablets. It’s the additives part. It uses Microcrystalline Cellulose, Vegetable Cellulose, Mannitol, Vegetable Magnesium Stearate, and Silica. And here, again, we have that Mannitol.

The not so good sugar alcohol. Something to preferably avoid. So, yet another not so good option, as far as just the ingredients.

For those people, who are a fan of neither tablets, nor capsules, the rest of the lineup (except the very last one) comes in the way of nuggets. Solgar Vitamin B12 1000 Mcg Nuggets to be exact with this one [R].

While this does offer more B12 than any of the previous versions per unit, it’s still that same cheap approach. Namely, with this, we get 1000 micrograms of B12 as Cyanocobalamin.

But as far as additive-players, this one has few new over any of the previously looked at products. It’s about Mannitol, Vegetable Stearic Acid, Vegetable Cellulose, Natural Cherry Flavor with Natural Flavors, and Vegetable Magnesium Stearate.

Mannitol is a no, as we went over earlier. But Natural Cherry Flavor can be real shady, too. It heavily relies on manufacturing which I like to believe that with Solgar is top-notch. But it’s definitely not that way with all supplements on the market. Which is something to keep in mind [R, R, R, R, R].

I wouldn’t bet on that.

Mannitol, again, being the sinner.

I mean, I’m not exaggerating that it’s the same supplement.

It has got the exact same additives (all of which are not great). It also plays with the exact same synthetic B12 vitamin form – the Cyanocobalamin. The form that’s the worst option for this particular nutrient.

With the Solgar Methylcobalamin 1000 Mcg Nuggets, it’s finally the more quality supplement. It finally replaces that Cyanocobalamin form with the more effective, natural, arguably the best form of B12 [R].

So, again, that’s less than optimal. I mean, why would anyone ever choose this over the options that offer the same form of B12 without that unnecessary sugar alcohol?

Now, this last one – the Solgar Methylcobalamin 5000 Mcg Nuggets – is their most potent quality B12 form supplement. But is it free of the additives we rather not have in our diet [R]?

As the name suggests, this one offers 5000 micrograms of B12 per nugget, B12 that comes in the form of Methylcobalamin. The natural, most awesome, most helpful form of this particular vitamin.

But for anyone that’s even remotely excited about this, don’t be.

It’s, again, that trash story of additives. I guess they just don’t make their vitamin B12s without that Mannitol. Which is a shame. But here, again, the rest of the other ingredients are likely okay.