In this Nature’s Bounty Probiotic 10 Review, we will explore all there is to be explored about the supplement. All to help you know all relevant before making a purchase.

Thus, this article will first focus on covering the claims made by the supplement manufacturer. Then we’ll stir our focus in exploring the probiotic strains present in the supplement, as well as the total amounts of them. And lastly, we’ll also reserve a section for additional beneficial substances and additives to discuss.

Nature’s Bounty Probiotic 10 is a probiotic supplement geared towards absolute well-being of your gut that is made up of 10 different strains, as well as has an additional beneficial substance to the mix. 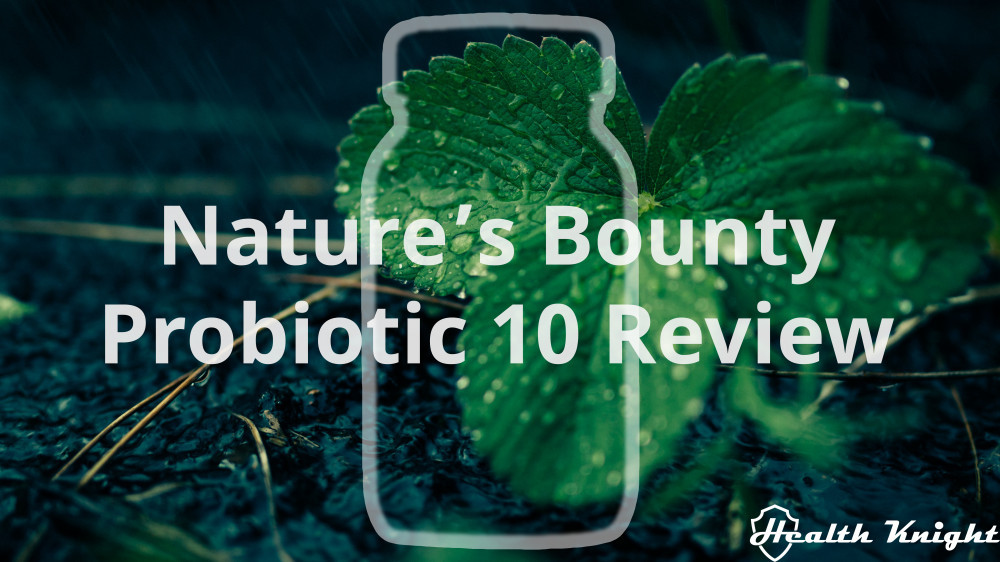 Although the description page of this supplement does contain more information than, for example, the one of Nature’s Bounty B12, it’s appropriate and not too loaded with information.

It does cover all the crucial stuff – Supplement facts, some five sentences about the supplement accompanied by a truly short video. Overall nothing boastful, all very down to earth.

In essence, the video and those 5 sentences explain what probiotics are and how they can potentially improve your health.

These are also the benefits that the description page of the Nature’s Bounty Probiotic 10 lists.

The supplement is also said to not contain any Artificial Colors, Flavors, or Sweetener, Preservatives, Sugar, Starch, Milk, Lactose, Gluten, Wheat, Fish, and Sodium. All while also being suitable for vegetarians.

Overall the supplement does sound quite captivating.

But does its ingredients stand behind it?

The Supplement Offers A Variety Of Probiotic Strains

Therefore, at the end of the day, a simple general rule to follow is that the more various species of probiotics the supplement contains the better. Which means that you should always go with a supplement that contains at least a couple of them [R, R, R, R].

But again the more the better.

Thus, when considering the Nature’s Bounty Probiotic 10 the number it provides – 10 various ones – it’s a very good number.

It’s much, much better than many of its competitors.

The Amounts Are Solid

There are many probiotic supplements out there that are not sufficient in providing proper dosage. Thus, those most of the time are too weak to provide a solid and significant benefit.

The best practices suggest that you need 10-20 billion of a population of probiotic bacteria twice daily. And this is exactly what the Nature’s Bounty Probiotic 10 provides.

To be exact, it recommends taking a serving of two capsules daily preferably with a meal. Any single serving or two capsules contain 20 billion probiotic bacteria. Meaning any single capsule contains 10 billion of the good bacteria.

Thus, the recommended daily amount of Nature’s Bounty Probiotic 10, in essence, is the lower margin of what is considered as the best practice.

Consequently, you might also opt for a double amount that accounts for 20 billion probiotic organisms twice daily. Surely, this will be more expensive but also potentially significantly more beneficial.

I would highly suggest this approach if you know you’ve been guilty of a lot of processed foods and loads of fast-food restaurant visits lately. But, by no means, you need to necessarily do this.

Going with the lower margin of what the supplement recommends will also be extremely beneficial.

Inulin Is All About Improving The Efficacy

Nature’s Bounty Probiotic 10 offers only one beneficial substance, however, it is very aligned with the main purpose of the supplement.

Inulin is the soluble fiber found in all kinds of fruits, vegetables, and herbs. In essence, it is a substance that stimulates the growth of the good bacteria in the gut [R, R, R, R, R].

There are a few side-effects known for this substance if you seriously overdo it, which on most part come in a form of stomach problems and can be easily remedied by drinking loads of water [R, R, R, R, R, R].

However, you’re extremely unlikely to encounter this in the Nature’s Bounty Probiotic 10.

So, in its very essence Inulin works as a complementary tool for the probiotics further improving the health benefits associated with them.

In nowadays environment, many supplement manufacturers try cutting costs wherever they can. One such area that suffers most due to this is additives.

Many manufacturers in their supplements employ harmful and in the long-term ill-side-effects promising additives. Furthermore, not rarely the harmless-harmful additive use varies greatly among various supplements of the same manufacturer.

Thus, it’s always crucial to explore what kind of additives does a particular supplement has.

In the case with Nature’s Bounty Probiotic 10, there are four additives – Dicalcium Phosphate, Vegetable Cellulose, Silica, and Vegetable Magnesium Stearate.

Of these, there’s been quite a debate about the Magnesium Stearate by far most people deeming it harmful, thus, avoidable. However, scrupulous and diligent analysis proves the other side much more accurate and the former completely unfounded [R, R, R, R, R].

But at the end of the day, all of these are considered harmless, thus, can be used generally without any possible implications on your health or well-being in the long run.

However, I must note that in truth, the risk exists always and with every ingredient imaginable because we all are different and the possibility of an allergy for some very few people can never be completely ruled out. Therefore, my point is that with these additives that are present in the supplement it’s extremely unlikely to ever affect you negatively, to say the least.

Could This Be Of GMOs? – Likely!

There is a particular trend visible when it comes to the claims expressed in regards to the Nature’s Bounty vitamins.

In regards to this particular supplement at hand, there is a claim that it does not contain any Artificial Colors, Flavors, or Sweetener, Preservatives, Sugar, Starch, Milk, Lactose, Gluten, Wheat, Fish, and Sodium.

But what about GMOs? First, why would they not list it as one of the claims (GMOs-Free or Non-GMO) if it were true?

That would only add to the value of the supplement.

Thus, it’s pretty safe to say that Nature’s Bounty Probiotic 10 has GMO ingredients in it.

While some may be indifferent to this, in fact, this is not a good thing.

Even worse this GMO most likely is present due to the Soy being in the supplement (it’s indicated on the label that it contains Soy). Which has every reason to come back later to haunt you.

Soy associated GMOs can potentially cause infertility, block protein digestion, mineral deficiencies, and other very unpleasant adverse effects. But above all, it is known to be a factor that promotes chronic inflammation [R, R, R, R, R].

Whereas chronic inflammation is the root cause of any chronic disease on the Planet, including cancer, dementia, Alzheimer’s, diabetes, and loads of others [R, R, R, R, R].

So, this is definitely something to think about and be aware of.

All in all, the Nature’s Bounty Probiotic 10 seems to be a quite solid and beneficial probiotic supplement.

It offers sufficient amounts and a great variety of various Probiotic strains. On top of that, it also invigorates the probiotic effect by having Inulin to the blend while also employing only harmless additives.

On that same note, it’s extremely likely that the supplement contains GMO material of soy, which is not really compatible with good health. And thus, over the long term can come back to bite you.

Which is never really something you should be after.

Thus, by all means, you can try the supplement if you’d like but I wouldn’t stick with it long-term – there are better Non-GMO containing, of similar quality and quantity probiotic supplements out there. One such great example is the Live Conscious Pro-45 (full review). So, no need to settle for this one.

Above all, I hope this Nature’s Bounty Probiotic 10 review helped you find the information you were looking for.