In this Optimum Nutrition Opti-Men review, we will take an in-depth look into everything that it offers. We’ll take a look at all of the nutrients, additives and beneficial substances.

Should you just go and purchase it? Or should you maybe run from it? We will get into that too.

Stick around. The goal here is for you to not need to look at any other reviews of the supplement ever. Thus, if there is a section I haven’t covered but you’re interested in, let me know. And I’ll add that to the review. 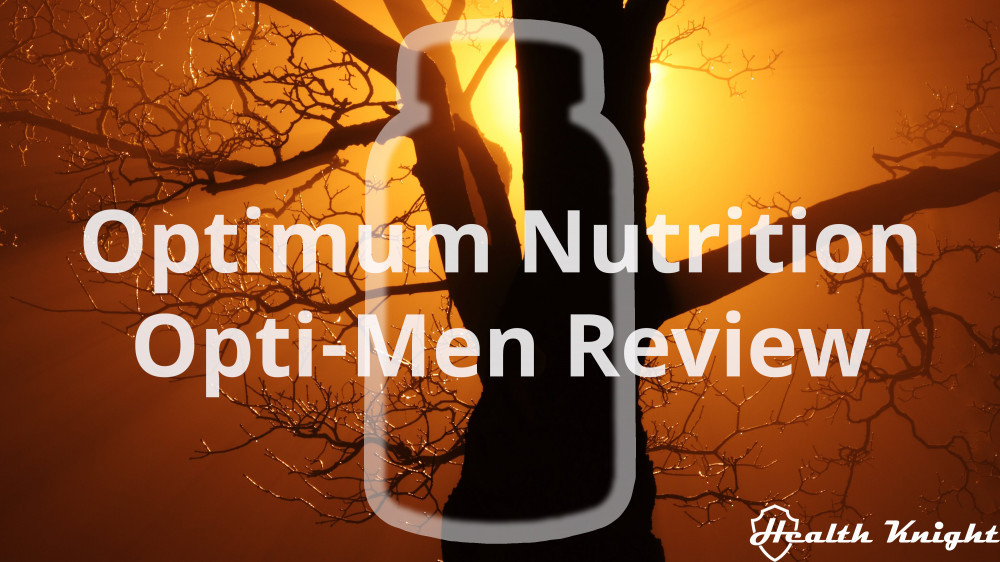 They claim that each serving includes free form amino acids, antioxidant vitamins, essential minerals and botanical extracts in foundational amounts that can be built upon through consumption of a healthy balanced diet [R].

Thus, they position Opti-Men as nutritional insurance for your fit lifestyle [R].

Which as we’ll see further it definitely lives up to.

In that sense, the supplements description page is an extremely refreshing one.

There’s no hype, no empty claims. No over the top assertions.

All of which is a good indication that the supplement is actually about providing value and not tricking you into buying it.

Vitamins In Opti-Men Are Pretty Solid

Optimum Nutrition Opti-Men offers almost all of the essential vitamins at least in some amounts.

There’s the vitamin A (Carotenoids), C, D, E, K, B1, B2, B3, B5, B6, B7, B9, and B12. Thus, although superficially it seems that it does not lack any of the 13 essential ones, there is, however, one missing. This exclusion is the preformed vitamin A. Which much like any of the other ones is crucial for great health. Well, you might ask: “But isn’t the vitamin A in the form of Carotenoids enough?” No, it is not.

There are in a sense two forms of vitamin A – Carotenoids and the preformed form. While both of them contribute to the benefits associated with vitamin A, they’re not the same. In fact, they have slightly different qualities [R, R, R, R, R, R].

Which can translate to various health conditions like poor vision, immune system or infertility among many others. Thus, it’s way more important than many consider it to be [R, R, R].

As for the vitamin amounts, most of them are in amounts sufficient enough (according to Prime Daily Values). There are few shortfalls but nothing too considerable.

Minerals Are Somewhat Sufficient, Not Ideal

Opti-Men similarly as it was with vitamins offers a very diverse set of minerals. Namely, diversity-wise it offers everything you could ask for. Mineral form and amount wise – not so much.

Calcium un Magnesium you’ll definitely need to supplement additionally as this supplement provides way too low amounts of them [R].

The vitamin forms are also not ideal. Which means that the actual forms of the minerals in the supplement are not ideal for absorption by our body once those are ingested [R, R, R, R, R, R].

Either way, by far the most struggle with these two. Thus, I wouldn’t consider it a negative.

As for Zinc, Copper, and Manganese, they are in quite ineffective forms. The first two, however, should not suffer that much from that as the amounts are still sufficient. Manganese on another hand is definitely not enough [R, R, R, R, R, R].

Two other fundamental substances – Choline and Inositol – although are present in the supplement, in amounts not sufficient enough for what is recommended by Prime Daily Values.

The Blends Are Insanely Powerful

As it was already indicated earlier in the article Optimum Nutrition Opti-Men offers 4 various blends.

There’s the Amino Men Blend, which is all about providing with 8 amino acids (L-Arginine, L-Glutamine, L-Valine, L-Leucine, L-Isoleucine, L-Cystine, L-Lysine HCI, L-Threonine). Not all of these are among the essential ones [R, R, R].

These will be great for anyone as they are considered the building blocks of life – compounds which our bodies can’t function without. These also have the capacity to help build muscle [R, R, R].

Then there’s the Phyto Men Blend, which is all about providing you with a bunch of Phytonutrients through various fruit and vegetable powders.

Additionally, there are also a few other substances added to the supplement.

Typically and for many multivitamin supplements, the section in which the additives are named is the most problematic one.

Although it does have 8 different ones, which is quite a large number, all of them are generally considered to be harmless.

In the past, most doubts I’ve had over Polydextrose. But it turns out that in truth Polydextrose is a low-calorie carbohydrate, which isn’t really a health concern [R, R, R].

For some people, certain doubts may raise Magnesium Stearate and Stearic Acid.

I’ve done the research, I’ve spent some 10+ hours in the past on that. Ultimately, it’s pretty clear and straightforward. These substances are absolutely harmless [R, R, R, R, R].

An interesting fact to illustrate this – babies consume infinite times more Stearic Acid through mother’s milk than we ever could as an additive in supplements [R].

Thus, to conclude there really are no negative health concerns in regards to any of the ingredients.

Although Optimum Nutrition Opti-Men is not absolutely ideal as a multivitamin supplement, it’s a very solid one nonetheless.

It offers good amounts of the needed nutrients. Diversity-wise it has everything. Plus, it employs only harmless additives.

One distinct drawback that the supplement has is the complete lack of preformed vitamin A. This can, however, be easily fixed by adding to your daily routine a vitamin A supplement.

Other than that, it’s one of the cheapest supplements that has made the list of the best multivitamin supplements.

Above all, I hope the article helped you find the information you were looking for, but if not – definitely let me know in the comments on how I could further improve it.

eVitamins | Get $5 Off On First Order |
Code: HealthKnight