So, throughout this article, we will be looking at the promotional materials of it. We will then dissect its active ingredients which we’ll then transition into all of the extra ones necessary for the making of the supplement (additives). Lastly, it will be about exploring customer reviews and trying to assess the global success rates along with a few words on the price.

It Has Got Absolutely Everything In Terms Of Marketing

According to the manufacturer, Great HealthWorks Omega XL Fish Oil is “a powerful essential fatty acid combination from the pristine waters of New Zealand.” Per their words and the words of their paid endorser Larry King, “Like you, OmegaXL is made for more.” Which is kind of their way of expressing the products superiority over anything else on the market [R]. 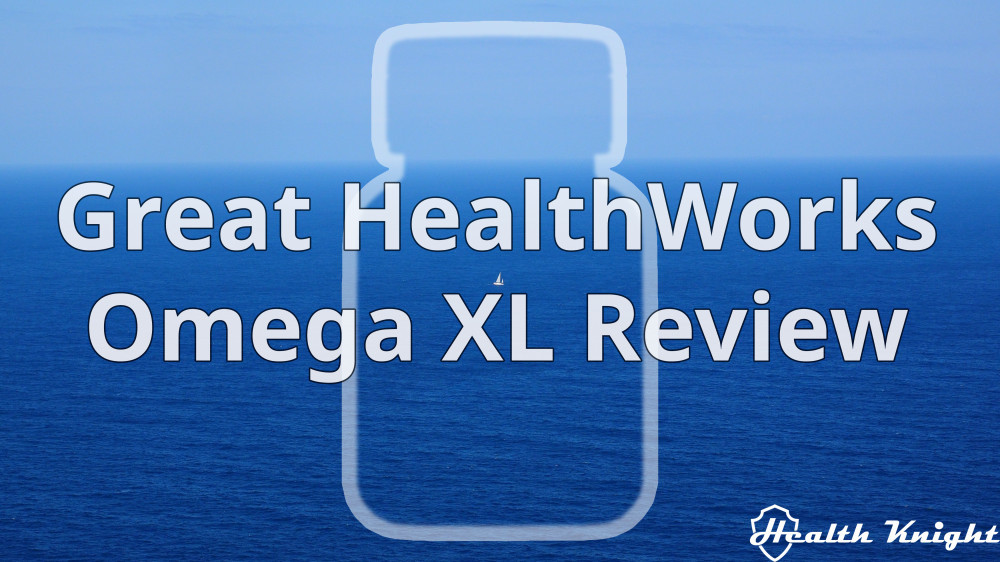 As for the product page itself, it’s very readable, much like the New Chapter Wholemega (review) and NutraSea Omega-3 (review). It doesn’t contain a lot of straight-up text; instead, it’s mostly expressed through various visuals and there’s even a table comparing what they have with the “average” or something. Personally, not really a fan of that comparison but perhaps we can discuss that more in detail later.

The main claim that they go with is that this OmegaXL supplement will help our joint health. Which is not something we typically see claimed with and Omega-3 Fatty Acid supplement. For example, we don’t find such promises with stuff like the Nordic Naturals Ultimate Omega (review) or the Kirkland Wild Alaskan Fish Oil (review).

Instead, we typically get something along the lines of better respiratory, heart, and immune health which we, by the way, get also here. But still, the emphasis is on that joint health and mobility.

Other than that, the way I see it, there’s a lot of marketing involved. Yes, they do not offer the of “by more, save more” or “subscribe and save” like many others. However, there are quite a bit of other tools they use.

For example, right off the bat it’s this idea “buy one and get one for free” which I bet sells like crazy (if only the base price was lower). Then, they use a famous figure which is another tactic. Then, there’s also a 60-day money-back guarantee. And they even list a few media sources where the supplement has appeared to in a way promote it legitimacy and robustness [R].

But is this Omega XL truly “an essential component of your daily health and wellness routine,” the way they put it [R]?

The Core Ingredients Of Omega XL May Sound Nice But What If?

To tell the truth, that’s very hard to tell right off the bat. I mean, despite all the praise and the notion of superiority we get bombarded with, they still fail to clearly present us with the supplement facts. Which I feel is not what quality manufacturers typically do.

I mean, there’s all this worship but no mention of what is actually in the product. Yeah, of course, apart from some extremely generalistic statements like Fish Oil from New Zealand or 22x more effective, or whatever. It doesn’t really tell the full story. So, I had to do some research in search of the actual ingredients.

I found that per serving (two softgels), the Great HealthWorks Omega XL contains 300 milligrams of OmegaXL Proprietary Blend. Which is a blend of Green Lipped Mussel Oil extract that’s comprised out of Omega Fatty Acids, Extra Virgin Olive Oil, and some D-Alpha Tocopherol. So, those three within the Green Lippe Mussel thing within their blend.

On one hand, we have this unconventional, awesome idea that has this wide profile of different Omegas within it. And it’s a supplement that has been tested in quite a few studies (I found nine total) which is something that definitely can’t be said about most [R, R, R, R, R, R, R, R, R].

It has proven to some extent that it can help Osteoarthritis patients (they forget to mention this on the product page) with joint health when compared to what they call industry standard Fish Oil (which, by the way, is nothing like the very best Fish Oil). It has shown some promise in helping muscle health after muscle-damaging exercise and reducing pain sensations after a 30 kilometer run. And there is something in helping ADHD children as well [R, R, R, R, R, R, R, R, R].

But on the other hand of all that, it doesn’t provide significant numbers of the most important EPA and DHA. At least as far as I can tell (they don’t bother to list those separately on the label, hence, probably not that much there). Of these two Omega-3s, we should get at least 1000 milligrams combined daily. With Omega XL, there’s no telling of how much or if any we get [R, R].

Hence, sure, we could get this. But we would still need another separate Omega-3 supplement to kind of cover all the EPAs and DHAs. So, is this really a needed luxury?

I mean, frankly, even if we are considering this because of the joint health, do we really want to go for it? I mean, there’s not that much proof that it will truly be helpful. Furthermore, I believe Turmeric Curcumin is just a significantly better, far more documented option to help with joints (here’s a real decent supplement of those, full review). I mean, personally, I would even consider a proper Collagen product for joints over the supplement of this review.

But there is one other more serious concern, why I believe that this OmegaXL can potentially be even more bad than good.

As a species of clam, they absorb pollution quite a bit, typically more than fish. Which only emphasizes how incredibly important it is that this oil is properly purified. And if you’ve read any of my Fish Oil articles, I’m strongly against any Fish Oil that hasn’t third-party tested for purity and potency.

And so, OmegaXL claims to be purified from harmful levels of mercury and chemicals. However, just about any Fish Oil out there claims that. But what do true quality options do, they third-party test. Which this Great HealthWorks products doesn’t.

Which isn’t exactly ideal to say the least. It’s a HUUUGE drawback. I mean, personally, I would never go for such a thing. Because if by chance the oil is contaminated, it’s likely to potentially bring more harm than good.

Review Of Additives Shows That These Particular Ones Are Fine

Additives are one of the trickiest aspects of any supplement. Did you notice that claim of “no fishy aftertaste”? It’s something usually achieved through adding some potentially harmful additives to the mix like Polysorbate 80 as we’ve seen that in a number supplements of Nature Made Fish Oil (review).

But what about the additives in this Omega XL? Does it also use that or similar ingredients to that?

No, it does not. But “no fishy aftertaste” is also not thanks to its other ingredients. It’s rather a thanks to the way this thing is sourced. It’s thanks to the clams.

So, the three inactive ingredients that the supplement of this review has are Gelatin, Glycerin, and Purified Water. Of these, the latter two are harmless, whereas the very first is actually beneficial. Granted, it might not be as useful if it’s sourced from Porcine (which most likely it is because they don’t specify it and that’s the cheapest source for that ingredient), but still [R, R, R, R, R, R, R, R, R, R, R].

Thus, at least as far as this aspect of the OmegaXL is something not troublesome.

Real Customer Reviews Are Hard To Find With This Great HealthWorks

If you do a google search, you’ll find an absolute ton of biased Great HealthWorks Omega XL reviews (similar to this one as far as the format). They are just trying to sell without really in-depth researching the thing. And that’s fine. But it does not help us learn how helpful the product has actually been to people.

There’s also nothing on the product page that help us genuinely learn about the unbiased feedback. Hence, I dived right into the vastness of internet to find some. And I did.

I mean, personally, that’s bad. Sure, it kind of means that it still supposedly helps 4 out of 5 people. Plus, the notion that people typically are more eager in reporting the negative experiences over positive ones. But still, I do not see it as a good success rate.

Which kind of makes us wonder… If it’s really that well studied and clinically proven to help as they are trying to paint, why the rather low success rate?

Well, because the studies are not exactly top quality with large sample size. Plus, they’re all funded by the manufacturer. Which means that there are likely some biases there.

I Believe It Is A Product To Avoid, So Not Worth The Risk

I mean, for all we know, it could be terribly harmful because it doesn’t get third-party tested for purity and potency. Furthermore, it doesn’t really eliminate the need for a proper Fish Oil supplement because it very likely offers very little of EPA and DHA Omega-3 Fatty Acids (so, I would pick a great Fish Oil over this any day of the week).

Ultimately, yes, Green Lipped Mussel might be an unconventional way of getting Omegas and maybe even helping joint health. Just don’t do it with Great HealthWorks Omega XL. Terribly expensive and lacks third-party certification for purity.

Moreover, there just are better options to help combat joint-related ailments or just in general promote joint health if that’s your goal. A decent Turmeric Curcumin supplement (full review) is what I would suggest trying first. But also, Collagen ones can help. Here’s a really great one, arguably the best one out there (full review). There are also patented forms of Collagen that deal with exactly that, here’s one awesome example (full review).

Above all, I hope this Great HealthWorks Omega XL review helped you find the information you were looking for. Did that Larry King endorsement get you to really consider buying this one? What do you think of it potentially not adding any (or very little of) DHA and EPA? Let me know below.