In this Rainbow Light Women’s One Review, we’ll examine up close everything that the supplement has to offer, as well as all the important aspects you need to consider before actually purchasing it.

Thus, in this review, we will start out by looking at some of the claims made for the supplement. Then we will continue on with dissecting all the ingredients that it has – vitamins, minerals, other beneficial substances, and additives. And we’ll end off with a look on the claims again to assess how true they hold.

Rainbow Light Women’s One is a multivitamin geared towards the well-being of women that while offers a great variety of nutrients also provides the added benefits of digestive enzymes and probiotics, organic vegetables and fruits accompanied by Spirulina, as well as the added benefit of especially for women designed Vitality blend. 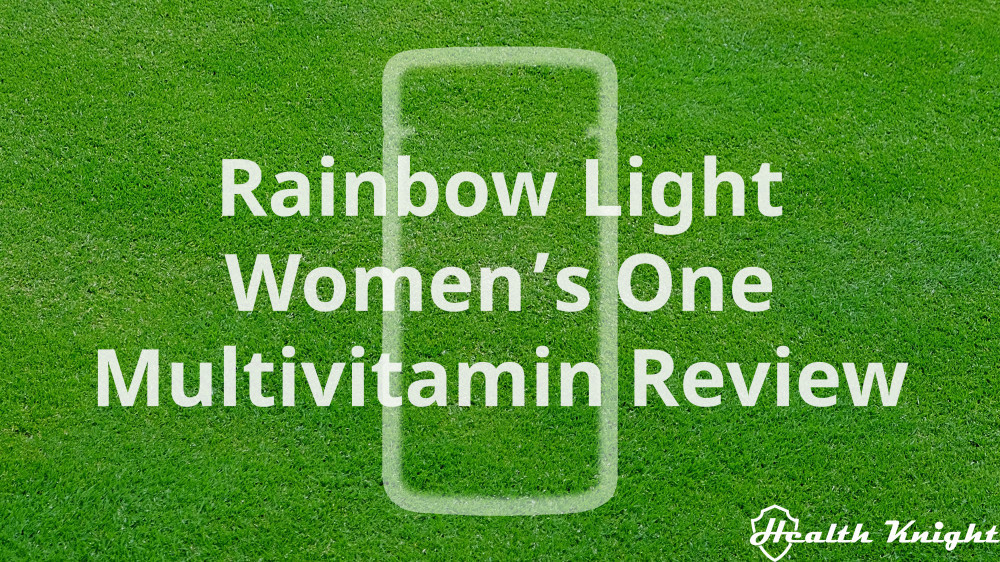 The product page of the supplement has a little more text to it than your typical description page.

So, they promise a comprehensive multivitamin that is once daily to take and will support energy production and immune health. They say it has a woman nourishing blend with Dong Quai, Organic Spirulina, and Red Clover, which are meant for stress and hormone balance.

Additionally, they also claim that the supplement offers a vegetable juice complex with kale, spinach, dandelion, and beet for some more energy to the already comprehensive formula.

And then further down the page, there are all kinds of claims associated with certain amounts of certain ingredients.

Or that the supplement has the total amounts of 125 milligrams of women’s nourishing blend, which will ensure hormonal balance, as well as there,  are a few other claims of such kind.

Further down there’s also the Purity Safeguard claim, which states that everything is made with natural ingredients, the purity of which has been tested.

Furthermore, the supplement contains no artificial preservatives, colors, flavors or sweeteners, as well as it does not have these allergens: Eggs, Fish, Gluten, Milk/Dairy, Peanuts, Shellfish, Tree Nuts, Wheat.

I mean, as always, it sounds pretty marvelous. So, let’s dive deeper.

Nutrient Forms – Not The Best But Not The Worst Either

Rainbow Light Women’s One combines within itself a lot of different nutrients. Sadly, though many of those, especially in regards to the vitamins, are in poor or average forms (vitamin forms determine how easy or hard it is for the body to absorb that vitamin).

In other words, in regards to a lot of the vitamin forms the supplement seeks the easy and cheap way out. And in so not differentiating itself from mediocrity. Some examples of this are the poor forms of vitamin B5, B6, and B9.

Whereas, when we look at the minerals in the Rainbow Light Women’s One it’s quite a different story.

A lot of the minerals are in pretty solid forms, which will only make the benefit that much more noticeable.

Don’t get me wrong, their not the best across the board but rather a mix of the good and the best. So, overall pretty good.

It also provides with Choline, as well as Inositol, yet only one form of Carotenoids, which isn’t great.

Overall looking okay but at the end of the day when also the amounts are considered definitely not among the best ones.

Nutrient Diversity Is Solid And Amounts Are Miserable

Many people believe that the Percentage Daily Values represents how much of a nutrient you need daily to be healthy. And thus, many strive to get the nutrients to be about that 100% (indicated on the label).

However, nothing can be further from the truth as the percentage daily value represents the minimal daily requirements you need of a certain nutrient to not get sick with a deficiency disease in the long run.

Which needless to say is completely different from having awesome health and maximum capability. More on this you can learn in the article I’ve written on the Prime Daily Values.

So, at the end of the day, if you’re all about the prevention of the disease the Rainbow Light Women’s One will do a good job for you.

If, however, you want something more for your health than just not get sick, then it’s not really the best choice.

Many of the nutrients that it provides are not in their most sufficient state. For example, there are no vitamins that reach the margins amount-wise stated by Prime Daily Values. They couldn’t be more mediocre.

On top of that, there is a complete lack of preformed vitamin A, which can’t be replaced by any amounts of Beta-Carotene [R, R, R, R, R, R].

Furthermore, there is also only one additional Carotenoid to the whole supplement, which besides the insignificant amounts you’ll find in some of the blends, isn’t enough [R, R, R, R, R, R].

What regards to the minerals, they’re in a much better state. Meaning, some of them do subscribe to the amounts defined by Prime Daily Values. But most do not.

Also, the supplement lacks one other crucial nutrient – Vanadium.

So, to recap, if you’re all about prevention – so far so good. If, however, you’re more concerned with actually improving your health by enabling more nutrients to your body, it does quite a poor job.

Definitely not some of the worst I’ve seen, like Centrum Silver Women 50 Plus, however, either way far from the ideal.

3 Blends + 2 Substances To Add To The Benefits

As for the additional beneficial substances, I feel that the supplement used to be much more abundant in the past. As of now, we’re left with 3 blends and 2 additional substances.

The first of the blends is the Women’s Vitality Blend, which consists of Organic Chlorella, Grape (whole fruit) extract, Organic Pomegranate (fruit) juice powder, Lutein. Which all in all doesn’t sound like much but actually can amount for quite some benefits.

Both the Grape extract and the Organic Pomegranate powder are marvelous antioxidants and can help with cancer prevention, blood sugar levels, bone, and joint health, brain, skin and hair health, as well as help against heart disease among other benefits. Furthermore, both are great sources of vitamin C [R, R, R, R, R, R, R, R, R].

Lutein is another great antioxidant, known as one of the Carotenoids. Whereas Chlorella is considered as one of the world’s superfoods, which is known for such benefits as detoxifying heavy metals and radiation, helping against cancer, supporting the immune system, lowering cholesterol and blood sugar levels, as well as being extremely abundant in various Amino Acids [R, R, R, R, R].

For example, Spirulina is known to benefit through great amounts of nutritional content, as well as by detoxifying heavy metals, helping against cancer, improving immunity as a whole, improving blood sugar levels, lowering cholesterol, and being an amazing antioxidant among many, many other great benefits [R, R, R, R, R, R, R, R].

Then we have those two additional substances – Citrus Bioflavonoids and Inositol.

I like to think of the first of these as the second line of defense after vitamin C as they have amazing antioxidative properties (antiallergic, antiviral, antitumoral, antihypertensive, antiplatelet, and overall anti-inflammatory). Thus, in essence, they are of assistance to the body in fighting off most bad stuff [R, R, R, R, R, R].

Thus, ultimately, these substances will definitely amount for some additional gains and could be considered to make up for some of the shortcomings of the Rainbow Light Women’s One discussed earlier.

Only Harmless Additives – Cellulose All The Way

Additives are the absolutely necessary added ingredients for the making of a pill, capsule, or whichever else form of dosage. In essence, these help to ‘glue’ together all of the beneficial ingredients in the supplement.

The sad part, however, is that most companies are completely reckless as to what substances do they use as this ‘glue’. Luckily though, Rainbow Light Women’s One is nothing like that.

They actually care for their customers’ health.

Thus, they use only harmless additives, which in this specific supplement comes in two various forms of Cellulose (Microcrystalline Cellulose and Hydroxypropylmethylcellulose) [R, R, R, R, R].

The Claims Are Deceiving

To be very honest, there are some huge incongruencies when considering the claims made and the actual supplement.

For example, the Rainbow Light Women’s One Multivitamin is claimed to have Dong Quai, Organic Spirulina, and Red Clover for stress and hormone balance. However, there’s no Dong Quai or Red Clover in sight when examining the supplement.

They also claim to have Vegetable juice complex with Kale, Spinach, Dandelion, and Beet for natural energy. However, again, when considering the supplement there’s no Dandelion in sight.

For example, those 10 micrograms of B12 is a ridiculously low amount to ensure proper energy production and nerve cell protection. You should be ideally getting 500-1000 micrograms instead.

Also, the women’s nourishing blend does not amount for 125 milligrams as claimed. Rather there is a considerably lower amount of 91 milligrams.

There are also other incongruencies, which overall is a pretty big deal if for example you’ve chosen the supplement purely based on their claims.

At the end of the day, they probably just haven’t updated the page, however, it’s still something to watch out for and can potentially deceive someone into buying something that is not in the best interests of that person.

Overall I have to admit that the supplement isn’t an impressive one.

Surely, there are the awesome benefits of the additional beneficial substances, harmless additives, however, when it comes to the best practices for vitamin and mineral amounts, it doesn’t look like much.

On that same note, however, don’t get me wrong this supplement can help you to improve your health and well-being, as well as add some extra nutrients to your daily life.

Thus, it’s really up to you. If it sounds like something you’d enjoy having as your daily multivitamin, I’m both hands for it.

On the other hand, if you’d like something more sophisticated and comprehensive take a look at the article on the best multivitamin supplements out there.

Whereas if you’re much rather interested in proper multivitamins that are based on 100% Daily Values explore this list of the best multivitamin for women.

24 thoughts on “Rainbow Light Women’s One Review – F*cking Up Health?”