In this Qunol Liquid Turmeric review, we’ll explore the thing in its utmost entirety.

We will push through promotional materials and the claims they persist on. We will explore both the beneficial ingredients and their nature, as well as an aspect many other reviews (and people) completely ignore – additives. Lastly, we will also dive into the customer reviews and every insight they have to offer with emphasis on global success rates.

The goal here is to create an article so thorough that there would not be a need for you to ever look at another supplement review for this specific thing. Therefore, if there is a section or aspect I haven’t covered but you’re interested in, let me know. And I’ll add that as well.

According to the manufacturer, Qunol Liquid Turmeric (in its full name Qunol Liquid Turmeric Extra Strength Turmeric Curcumin Complex) is a supplement that “provides one of nature’s best kept secrets, curcuminoids, a group of antioxidants that have strong, natural anti-inflammatory benefits for physical overexertion.” Plus, per their words “Curcumin can also play a major role in supporting joint health” [R]. 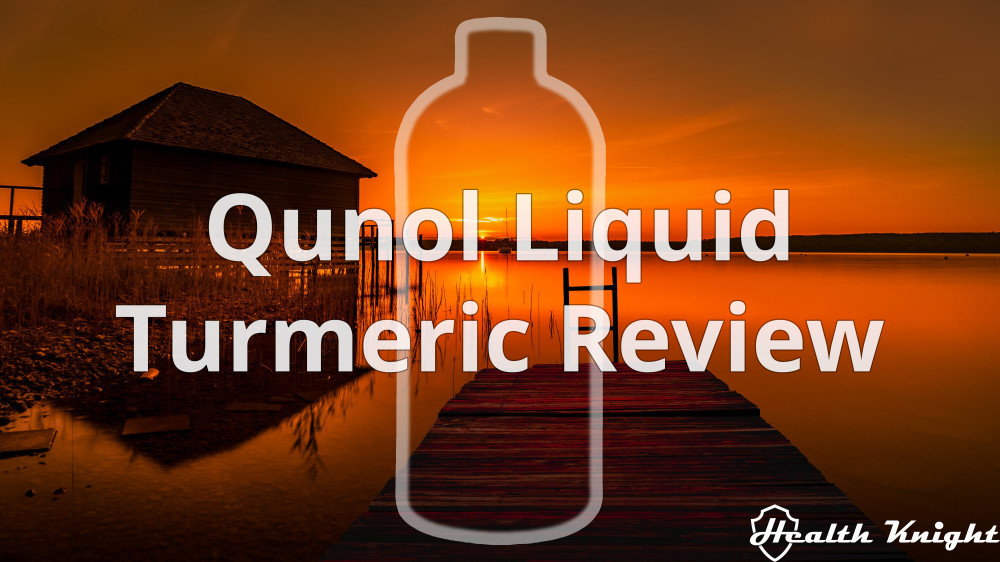 The product page itself generally I think is a decent one. It’s not too overloaded with text or overwhelming in any way.

That said, it does make use of quite a bit of marketing. There’s the notion of subscribe to monthly shipments and save, save even more if we order 3+ bottles, and, of course, an overwhelmingly positive customer review section. Plus, there’s also this vague notion of 99% of respondents recommending the product.

Another rather annoying or unnecesary aspect is that of there being two different product pages (different URLs) with the exact same information copy-paste. Kind of reminds me of PureNature Turmeric Curcumin, only that was not as strictly of a duplicate. At least visually [R, R].

As far as the claimed benefits go, their kind of definition of the product (the one at the start of this section) mentions a few already. But there’s also a benefit section where once again but completely unnecesary they list everything. The only other thing there is the promise of high quality. Which, by the way, is as vague as they come.

I mean, we won’t find any third-party certifications or, God forbid, third-party testing with this unlike we’ve seen with Gaia Turmeric Supreme or Nutrigold Turmeric Curcumin Gold.

They don’t also provide any “free of” claims or anything like that like so many other Turmeric supplements do (Smarter Curcumin and Nature’s Truth Turmeric Curcumin are just some of the examples here).

With that in mind, really the only thing somewhat going for them is this promise of it being an Extra Strength formula and it having improved absorption. Other than that, it looks pretty sad despite the product page having a good first impression.

The Turmeric Part Is Fine, The Proprietary Blend’s Part Is A Joke

Meaning, the way I see it, they’re implying that it’s common to come across supplements that are quite scarce in Curcuminoids whereas this one is very abundant. However, while there definitely are a fair share of 5% supplements (like Swanson Turmeric and at least one of Spring Valley), the 95% ones are not that rare at all. In fact, I feel they are far more common than those 5% things.

So what does this Liquid Turmeric of Qunol exactly consist of?

Per serving (one tablespoon), it offers the already mentioned 1000 milligrams of Curcumin extract consisting of 95% Curcuminoids. This gets coupled with 1209 milligrams of Proprietary Turmeric Support Complex that consists of Glycerine, Acacia Gum, Xanthan Gum, Guar Gum, Ascorbic Acid, and Black Pepper Extract. No way of knowing how much of each is exactly there.

What regards the Turmeric amounts, that’s decent for a mainstream Turmeric Curcumin supplement. But as for that proprietary blend, I’ve no idea what to make of it.

On one hand, it’s kind of necesary given that Black Pepper extract is known to improve Curcumin’s absorption by 2000%; so, it’s a must. But on the other hand, the way I see it, adding Glycerine, Acacia Gum, Xanthan Gum, Guar Gum as beneficial (active) ingredients makes little to no sense. Unless I’m profoundly missing something neither of these can offer any significant benefits [R, R, R, R, R, R].

I mean, frankly, there are so many herbs, proteins, oils, and all kinds of other beneficial substances that would make a far better addition.

So, why these exactly?

Well, I think it’s a little dirty secret of theirs. Take for example any other supplement, they use these substances as additives, necessary ingredients for the making of those supplements. Look at Qunol Liquid Turmeric, it uses those to supposedly grant benefits.

I mean, don’t get me wrong. Many of them (if not almost all) I would consider mildly beneficial. Great for their primary and common use as additives. But quite miserable if we’re depending on them for benefits.

Hence, I’m not really fond of that Proprietary Turmeric Support Complex. I believe it might be there to create the impression that the product is much more beneficial and than it actually is, a sense that it provides more value than it actually does. But I feel it’s wasted money apart from that last of the list (Black Pepper extract).

One would think that with four essentially additives being listed as beneficial ingredients, there’s pretty much nothing to be listed for the other ingredients section. But that’s not the case with Qunol Liquid Turmeric.

Generally speaking, Luo Han Guo, also known as Monk Fruit (a natural and actually healthy sweetener) is typically a harbinger of high-quality. But while that may be true as far as avoiding sugar contents go, it’s not the truth all and throughout [R, R, R, R, R].

Many see Natural Flavors as a good sign. But, in reality, it’s only a good thing if the manufacturing practices used for the product are top-notch. And as far as Qunol Liquid Turmeric goes, I’m not that convinced. I mean, their about us page is as superficial, vague, self-proclaimed as they come. And I wouldn’t trust that. Plus, the way I see it, they’re only somewhat emphasizing the quality; it’s more about absorption for them [R, R, R, R, R, R].

Citric Acid is a substance naturally found in all living things and in citrus fruits. However, the modern and cheap approach is that it’s commonly created from GMO material. That’s one of the dangers with it, one that I’m 99% certain plagues also this Qunol Turmeric. I mean, since it doesn’t contain a claim of being Non-GMO, can we really depend on Citric Acid not being of that material? No. We shouldn’t. There’s just too big of a chance for it to be exactly that [R, R, R, R, R, R, R, R, R, R, R, R, R].

Whereas with Potassium Sorbate there is no 1% guessing involved. Well, okay maybe there is because we will find people that advocate both sides of the argument for this. However, there is far more evidence (and some studies) that this substance can actually create problems. Creating stuff like allergic reactions, nutrient deficiencies, DNA damage, and even cancer are just some of what can happen [R, R, R, R, R, R, R, R, R, R].

All in all, definitely far from ideal.